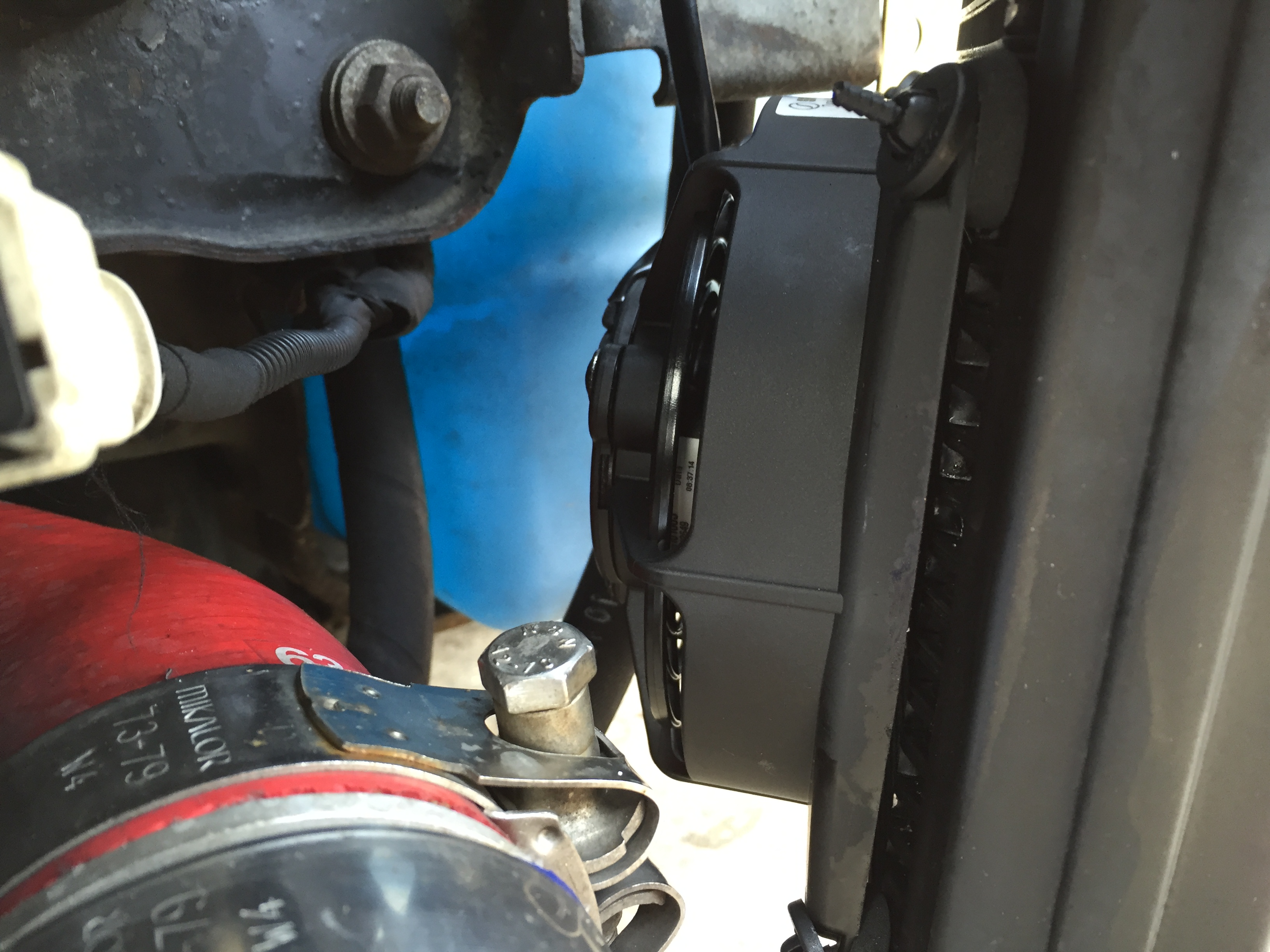 For the last year or so, since I have been pushing the power limits of the Q-Tronic Gearbox, I have had an issue that has been getting progressively worse, as the power increased.

For those that don’t know, the Q-Tronic gearbox in the Alfa 159 is actually a Aisin Warner TF80-SC, also known as the AF40-6. This is a complex automatic 6 speed gearbox that has the combined use of a conventional 5-pinion planetary gear-set and a compound Ravigneaux gearset which makes it incredibly light and compact. This combination is known as a Lepelletier arrangement. The shifting of gears is managed by a computer programme which oversees a clutch-to-clutch actuation. Gear changes are accomplished by one clutch engaging the instant the clutch from the previous gear disengages. (Source https://en.wikipedia.org/wiki/AWTF-80_SC). This gearbox is used in an extensive list of modern vehicles and is a very strong and versatile unit.

While the power being fed into the gearbox was within manufacturer tolerance, i.e upto 450-500nm everything was just fine and every gear-change was silky smooth, however, as soon as pushed the power north of 500nm I started to have issues.

Essentially, the problem manifest as one of two common issues often associated with a worn or damaged valve body. These were:

Neither of the above problems are particularly nice to experience and needed resolving.

In about May 2015, I noticed that the issues were related to me “driving in a spirited manner” and as such I decided to monitor the gearbox temperatures to see if that was part of the issue. This quickly showed that the issues only manifested once the gearbox oil exceeded 90 degrees C. The following data log graph shows the temps hitting 98 degrees C in under 20 minutes of “spirited driving”: 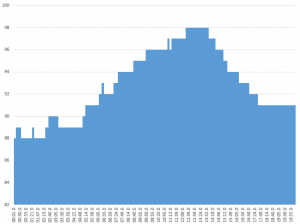 As soon as I pushed the power into the gearbox it became unusable.

Some research into the oil used in the gearbox showed why heat was the problem. The following extract from the technical specifications of the oil I use in my gearbox (Fuchs Titan ATF 4400), clearly shows that the Kinematic Viscosity of the oil at 40 degrees is 37.3 mm2/s while at 100 degrees it is 7.3 mm2/s. That is a big difference! So, if my oil temp hits 98 degrees the efficiency of the oil to be useful and lubricate is negligible, and in cases where I have seen the temp up to 110 degrees C (at Nuremberg), I essentially was lubricating the gearbox with water…..

This became a real issue in September of 2015 on a trip to the Nurburgring. A combination of an aggressive track and blistering heat meant that the gearbox hit 110 degrees within 1/3 of the track and after only a few corners I was having to limp through gear changes to keep the car moving. Not the most pleasant experience to have on the ring.

From this point onwards I started to research exactly how I could solve the issue.

The gearbox oil cooler is a Laminova type cooler that uses the engines water cooling system to pass water through a block attached to the side of the gearbox that has an oil circuit in it. This allows the water to cool the oil through proximity. all you need to know about oil coolers is here on Mocal’s site: http://www.mocal.co.uk/FAQ.html.

After much thought, the plan was simple. Make the oil cooler a traditional air cooled external unit of larger size so that the harder I pushed, the greater the airflow and the more cooling was available.

To do this, I needed the help of my friendly mechanics, the much trusted and respected Autolusso. Ned and his team have been the ones who do all the work on my car and with the exception of the off tweak here and there, have been responsible for all of the major modifications made to the vehicle to make it the monster it is today.

I enlisted Ned to help me find and/or design an adapter plate that would allow me to remove the oil cooler that was bolted to the side of the gearbox and replace it with a set of pipes off to a cooler mounted up front. After many conversations with a few different suppliers, we pulled a few different cables, pipes and parts from different makes and manufacturers together and started the research.

We quickly established that there was nothing available or even close to what we needed, so the best shot we could find was a set of oil cooler pipes of a 3 series BMW. These fitted backwards! so at least we had something to play with.

We continued to research and plan over the xmas period until, after a dyno night, I realised my car was about 50 horses down on power from where it should be! This was not amusing, and as such I spent a few weeks looking through my many iterations of the map until I found the one table that I had not carried forward. To cut a long one short, my total injection was being limited to 100mm3 where as it should have been at 130mm3. After a coupl eof tweaks and a test to 120mm3, the car was flying again, but the gearbox was now very unhappy and it only took a 0-100mph run (not on public roads) to make the gearbox temps over 90 degrees C !!!

So Ned and I decided to bite the bullet and just crack into the mod to see where we ended up.

A suitable cooler was chosen out of a small selection Ned had put out for me: 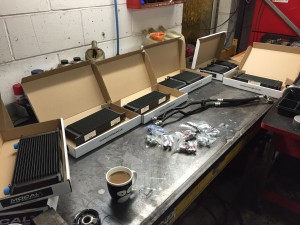 And we took off the original Laminova cooler to see what the options were. After some initial head scratching we decided what we needed to do was to use the existing cooler as a plate to weld on some BSP fittings, so Ned grabbed the biggest grinder he could find and proceeded to destroy the unit in the name of research! 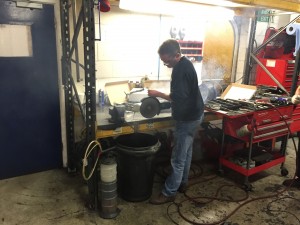 After a quick session of destruction he disappeared with the remains of the part and resurfaced about 20 minutes later with the finished prototype: 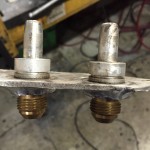 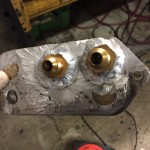 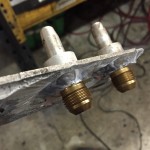 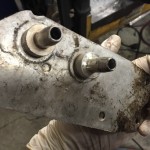 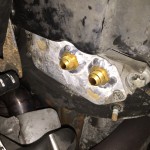 This meant we could bolt the remains of the original cooler back onto the gearbox safe in the knowledge that it would not leak or  fall off or otherwise fail!

All that was left was to fit the selected oil cooler in place and run some pipes: 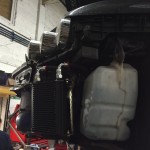 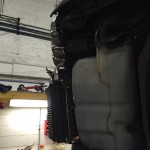 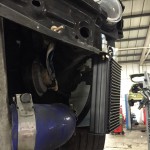 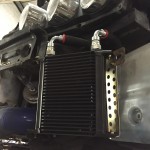 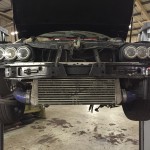 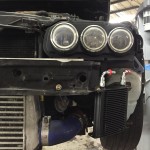 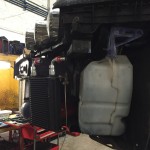 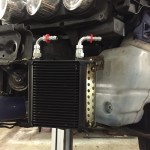 To do this a bracket was manufactured to allow the cooler to live off to the side of the FMIC where it could get a decent airflow (as I had already removed the fog lights and modified my front bumper for greater air flow). We also had to relocate the horns next to the FMIC but this was a straightforward move. 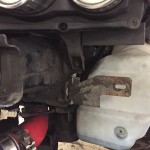 One final mod was to remove the water cooler circuit that went from the EGR to the old cooler and back to the engine. To do this all we had to do was remove the pipes and cut one to make the 4ft of hose now 4 inches! 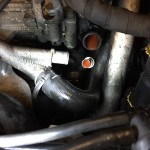 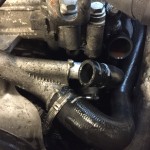 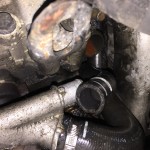 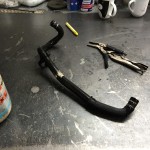 All that was left was then to put the front bumper back on, top up the fluids, run it round the block and see how it performed! 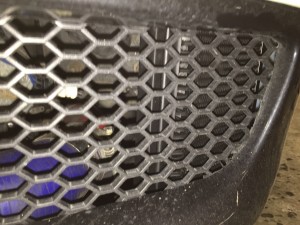 I decided to data log the run home. a Good 90 minutes of M1, A421 & A1 in rush hour traffic, so mixed driving, on and off power and in and out of standing traffic. In order to push the gearbox I deliberately pushed power as much as I could do so safely and often sat in the wrong gear to get things as hot as possible!!

The following graph is of that 90 minutes of mixed driving: 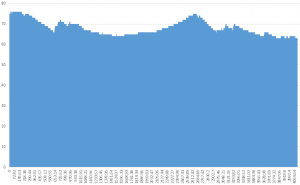 The first thing to point out is that the max temp reached was 76 degrees!!!!!! and the lowest temp, often observed at speed was 63 degrees! This is as perfect an outcome as I could of hoped for as it means the kinematic viscosity of the oil is well within tolerances and effectively lubricating the solenoids so that they can engage and disengage the clutches efficiently!!

The gearbox worked perfectly at all speeds and power levels throughout the entire journey!

Time will of course tell, but early data says this mod is a must have for any owner of an automatic gearbox that wants to unleash the power that their engines are capable of delivering. Trust me when I say, that these gearboxes just lap up the power! (as long as you keep them cool 😉 )