The Halo units require good, clean regulated power to run or they will burn out. A cars power supply is the exact opposite of this, its dirty, unregulated and a very bad place for electrical items to live! As such, most electronics in a car have additional protective mechanisms to keep then safe. The Halo controllers & rings are no different.

Please refer back to the Parts List to see what components you need for this phase. Also please note that this wiring can be completed at any time, ahead of the Halo’s being installed as it will not effect anything in the car.

The basic idea is to provide a direct feed from the battery to the power supply unit that is switched via the ignition feed, and then to run 2 x power leads from that power supply to the headlight locations ready for connection to the Halo controllers.

Start by opening the bonnet of the vehicle to access the area where you will be working.

Now you will be able to access all the parts you need to.

Using Figure 2 as a point of reference, follow the following steps:

NB: I personally found that I could just push the power supply and the relay easily into the space between the fuse box and the suspension turret in my engine bay and the look that runs over the top holds things in place quite well. Your engine bay may be different and as a result you may need to find an alternative location. If that is the case you will need to adjust the cable length suggestions in the above steps to account for a different location to be used. 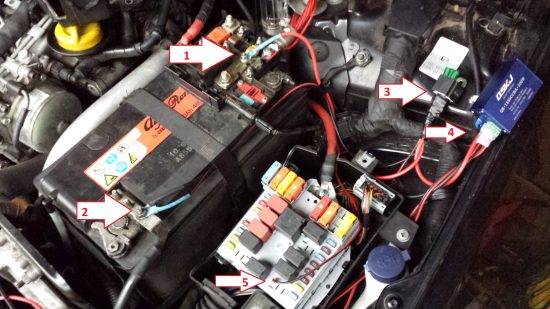 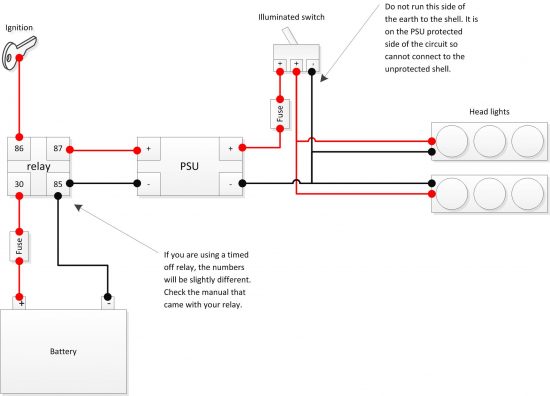 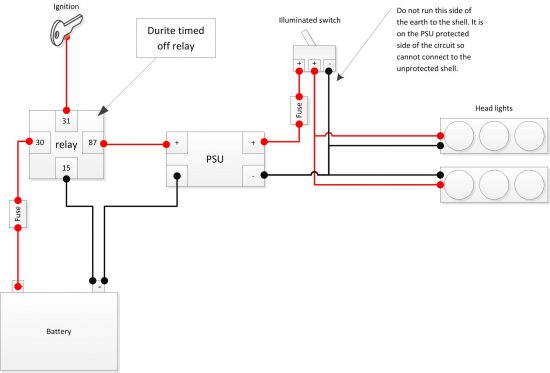 Once the power supply is in and running all that is left to do is to run the remaining cable 12v twin core 8.75A cable to each headlight location.

NB: make sure in both of the above steps you leave enough wire near the headlight to account for fitting & removal of the units.

NB: At this stage it is recommended to solder these twisted connections to keep them secure and stop them working apart.

NB: Some project members have had issues with their power supply spiking and destroying the controllers. It is therefore recommended that an in line fuse of 2A is added to each headlight run. This will protect the controllers in the event of a power surge due to a faulty PSU.

After this is done you will have a dedicated feed to the Halo controllers that is both regulated & protected, as well as switched on and off via the ignition of the vehicle. If you have chosen to use the timed off relay, this power supply will stay powered for the time you chose when you purchased the relay (10s suggested).

The PSU unit has two small screws near the LEDs that are attached to trim pots inside the unit. Each of these adjustments lets you tune the amount of power (voltage & amps) that the supply is delivering. The Halo’s & Rings are low power units so will tax the PSU much. To that end, adjust the PSU as follows:

NB: You can measure the amps a system draws using a multi-meter by putting it in-line to the feed to the controllers: https://www.youtube.com/watch?v=HWA9WqSEjg8

NB: If you put too much voltage into the controllers, the electronics have a tougher job to get rid of the excess, and excess power is always turned into heat which can and will cause the controllers to fail. Way Too much input voltage will just blow the input regulator to the micro-controller and fry the board.

It is easy for me to detect if the controllers have failed this way and refunds will not be given!